Pathology plays a critical role in cancer care.  It is the only way to definitively diagnose a cancer, grade how aggressive it is and measure how far it has spread, and yet it has long been a background thought throughout modern medicine. It associated with jobs of a repetitious nature within dull settings, often practiced by those who perhaps want to take a break from more stressful clinical roles. In fact, it would be fair to say that many people do not actually know the role of a pathologist. But they certainly do in Leeds.

Leeds Teaching Hospitals NHS Trust already boasts one of the largest pathology labs in the UK; located in St James Hospital, it produces over 1000 histology slides per day. As of 11th of October, every single slide produced can be viewed digitally.

Digital pathology, otherwise known has whole slide imaging (WSI), allows for the viewing of glass histology slides to be conducted on a computer as opposed to underneath a microscope. This could result in a seismic shift within pathology and potentially modern medicine.

To appreciate this, it is essential to understand just how desperately pathology needs rejuvenating and the obstacles traditional pathologists face. The innovation occurring in Leeds has the potential to revolutionise the workflow of a pathologist and ultimately, their ability to effectively and efficiently diagnose disease. One must also understand this progression in the context of other technological advancements, potentially further revolutionising the workflow of pathology.

But what exactly is it about the process of pathology that is now different? And how are these spectacular images created? Despite digitisation, there is still the need for highly skilled and often painstaking manual work that has always been associated with pathology. Each specimen is carefully trimmed to fit into cassettes before each being embedded in formalin wax. Once the wax has set, the sectioning process begins where each specimen is trimmed into microscopic sections before transfer to a glass slide.

As most tissue cells are transparent, Histochemical stains (typically haematoxylin and eosin) are therefore used to provide contrast to tissue sections, making tissue structures more visible and easier to evaluate. It is the staining process which give these slides the spectacular array of colours that you can see now.

It is the next step where things start to

change. Instead of sending the slides to a pathologist to view underneath a microscope, they are placed within highly sophisticated, dedicated scanners to capture images used for primary diagnosis, to date over 200,000 slides have been digitally scanned from Leeds and the surrounding area.

The scanners are provided by Leica Biosystems, who work in partnership with Leeds Teaching Hospitals. A Leica Biosystems Aperio AT2 scanner usually takes around 2-4 minutes (depending on the amount of tissue on each slide) to create a complete digitisation for each slide at up to 200,000 DPI. To put this in some perspective – if one digital slide was printed at 300 DPI (used for most standard photos) it would produce an image the size of a tennis court. Each digital slide takes up on average 1 GB of memory, meaning that the daily rate of 1000 digital slides that the hospital is producing is in turn creating 1 terabyte of images to store every single day. The scale of this project is quite simply, as one doctor put it, ‘immense’.

Once each slide has been digitally captured, they can be sent instantly for examination in ultra-high resolution using the ‘Powerwall’, a huge LED screen allowing for 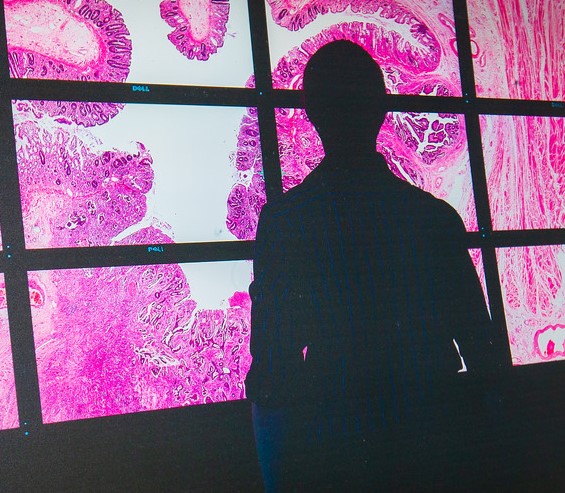 demonstrations to students and the wider public, operated via a video game controller.

Some of the obstacles facing traditional pathologists are quite alarming. Pathologists who face long commutes and are required to work remotely have had to physically carry specimens to and from work. This increases the chance of losing slides, a problem that several doctors iterated is common within the field of pathology. The loss of a single specimen could delay diagnosis of a patient’s disease and ultimately surgery by days, potentially being catastrophic for patients.

Thankfully the innovation at St James’ University Hospital can render these problems a thing of the past. Through viewing digital slides on a computer screen, staff cycle instantly between any numbers of slides through ultra-high resolution.

With the correct software installed these slides can be viewed remotely, from anywhere in the world. This allows for streamlined case preparation from multidisciplinary (MDT) meetings and encourages far easier collaboration with other pathologists in complex cases of diagnosis without compromising patient safety.

Currently there is an increasing demand for pathology with an ever dwindling pool of resource. Due to other advances in medicine doctors are now able to detect more complex cases of cancer and are able to do so much earlier in a patient’s life. 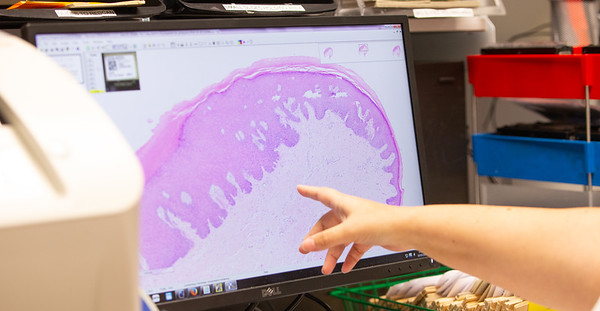 According to Cancer Research UK, the year on year volume of cellular pathology requests increases by an average rate of 4.5% and yet the number of trained pathologists has only increased by 1.2%. To make matters worse, 32% of cellular pathologists in the UK are over the age of 55 and are expected to retire in the next five years.  Thus digital pathology has the potential to improve workflow and pool resources across hospitals.

This fully digitised lab now opens the door for the future use of Artificial Intelligence (AI) algorithms to further speed up and improve diagnosis. Computer programmes could potentially help pathologists detect smaller areas of cancer and better quantify and measure tumours. So Leeds Teaching University Hospitals will continue innovating and revolutionising the field of Pathology, one slide at a time.