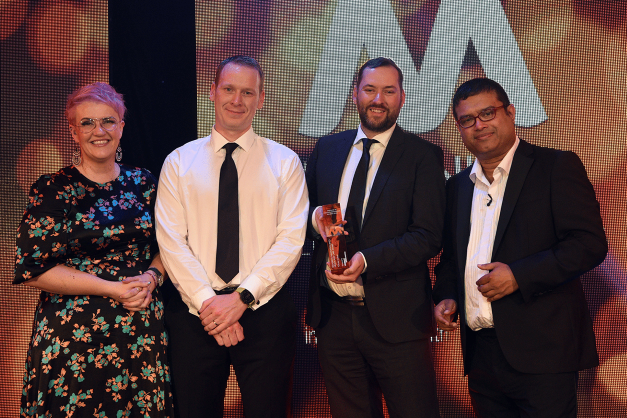 Above: Paul Rawlinson, Director of Tutum Medical Ltd (second from right), receives the award for ‘Delivering Innovation in to Health and Care’.

Sheffield based Tutum Medical have been recognised nationally for their outstanding contribution in ‘Delivering Innovation in to Health and Care’ at the recent Medilink UK Healthcare Business Awards in Birmingham.

This National Award is for the development of BEAMS (Bedside Equipment Critical Alarm Monitoring System), an acoustic monitoring system for all critical bedside alarms and in partnership with Sheffield Children’s Hospital.

Paul Rawlinson, Managing Director of Tutum Medical Ltd said: “Winning this award is fantastic and a worthy accolade to everyone involved in developing the unique BEAMS monitoring system. I would especially like to thank Sheffield Children’s Hospital who initially approached us to develop this system for them, and to Professor Derek Burke and Sue Ievers who have been outstanding in their support and encouragement at the hospital.”

Missed hospital bedside alarms are highly prevalent. This can lead to major incidences, such as: Patients failing to get the prescribed amount of medication; Deterioration of a patient’s health; Serious injury and even death.

The successful BEAMS system developed for and with Sheffield Children’s Hospital, allows nurses and other medical staff to improve response times to hospital bedside alarms, especially for critical equipment. This makes life easier for the workforce, as well as improving patient care and experience. The system integrates a digital platform with audible monitors, a speaker system and nurse consoles. It is also mains-operated and creates its own Wi-Fi mesh network which removes the need to interface to hospital infrastructure.

Sheffield Children’s Hospital has now installed the system in 70 single occupancy rooms across six wards in the hospital producing a significant improvement in response times to critical alarms. BEAMS is also at various stages of trial with other hospitals throughout the UK.

The prestigious Medilink UK Healthcare Business Awards, held in association with Med-Tech Innovation, celebrates the outstanding business achievements, international successes and innovative breakthroughs made across the life sciences and healthcare technology sectors in the past year. The ‘Delivering Innovation in to Health and Care’ Award was sponsored by Unipart Logistics, for an innovation that is being adopted by the NHS and that has demonstrated an impact on efficacy, patient outcomes and NHS system costs.