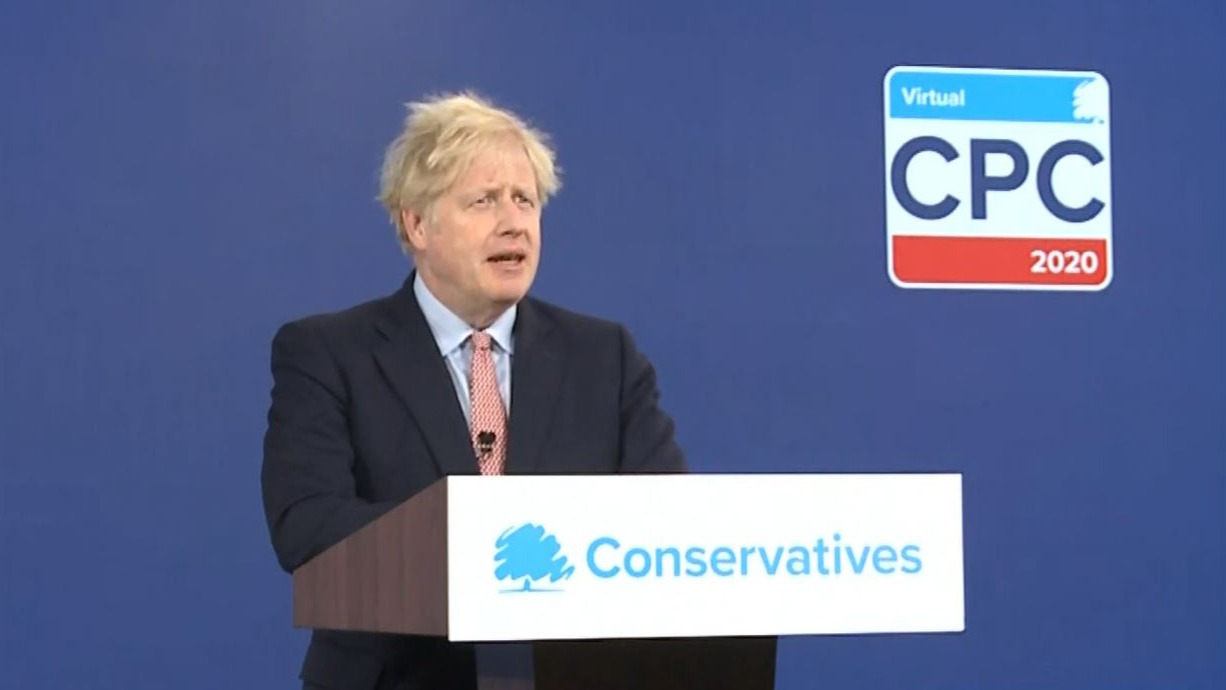 In the face of a second wave, the Prime Minister used his conference speech as an attempt to unify both his party and the country with post-Covid vision for Britain.

Whereas last year’s conference was used to set out a post-Brexit vision for Britain, this speech was an attempt at outlining a post-Covid one. “Get Brexit done” has become “Build Back Better”. The aim of this was clear, with backbenchers growing increasingly hostile to further anti-Covid measures, the Prime Minister tried to whip up moral of the Tory party with an upbeat vision for the country over the next decade. Johnson wants to see a “dynamic recovery” from Covid, an almost Atlee-esq transformation, rooted in free enterprise to “level up” the country.

The Prime Minister confirmed some highly ambitious pledges for renewable energy, forming part of what he is calling a “green industrial revolution”, containing a pledge for Britain to produce 40 gigawatts of wind power by 2020 and achieving a net zero carbon emissions across the UK by 2050. “As Saudi Arabia is to oil, the UK will be to wind” he said.

He also sought to turn “generation rent into generation buy”, with the introduction of five per cent mortgage deposits for first time buyers.

In “Building Back Better” Johnson is looking to invoke a post-war mentality, saying that “we have seen off every alien invader for the last 1000 years,” and that Covid would be the next vanquished foe.

If one had buried their head in sand for the past year was listening to this speech, they might have been forgiven for thinking that we were finished with Covid-19. Sadly, we are not even close.

The number of UK deaths from Covid-19 has risen for a third week in a row, adding to a total that is already the highest in Europe and daily cases is now exceeding 12,000. Repeated Government blunders are not helping things, most recent of which being the loss of 16,000 cases by Public Health England due to a an “IT error” –  the agency is now scrambling to contact up to 50,000 people that could have been unknowingly spreading the virus over the past month. This is before we mention an NHS Test and Trace system that increasingly teeters on the verge of collapse. The silence on these issues throughout the Prime Minister’s speech was deafening.

The lack of detail on UK preparedness for a second wave will have been concerning to all in the health sector. That being said, Johnson did double down on his pledge to recruit 50,000 more nurses, 14,000 of which have already been recruited this year – although there was no mention supporting and retaining the existing workforce. The social care sector did thankfully get a mention, with the Prime Minister pledging to finally readdress the imbalance of health and care services that Covid-19 has spotlighted. Although this certainly is not the first time promises have been made by this Prime Minister on social care…

Boris Johnson was also keen to showcase the success of the UK research sector, the response of which to Covid-19 has perhaps been one of the biggest success stories from the pandemic. Johnson took the opportunity to praise the work of industry, saying that we must, “let the private sector to get on with it”. It is not the state the produces innovative medicines, he says, but the private sector with their “rational interest in innovative treatments and therapies.”

The 48 hospital build project, details for which were announced last Friday, also forms a key component of his post-Covid vision – although it is unclear exactly how these new facilities will help us against future pandemics, Health Secretary Matt Hancock was not able to provide anything close a coherent answer when asked about this at Monday’s Policy Exchange fringe event a the Conservative Party Conference.

As a second wave stares the Prime Minister in the face and NHS health providers warn of of a winter that could cripple the health service, the Prime Minister opted for a gag-filled speech that will do little to quell the fears of the nation.

The Prime Minister is right in that, “it isn’t enough to go back to normal,” and he also right that history teaches us that events of this magnitude, don’t just come and go – they are the trigger the social and economic change. But unlike Atlee following the second world war, Covid-19 is still here and is making an increasingly deadly comeback, and public faith is falling off a cliff.

It isn’t surprising that Boris Johnson took this tone, he has always been most comfortable when giving good news, when he is able to weave his unique choice of colourful superlatives and posh colloquialisms into speech – today he spoke of the “gossipy gregariousness and human contact that drives the creativity of the economy.”

Without the enthusiastic applause of the Tory faithful that would normally accompany the PM’s speech at conference, the upbeat gusto seemed rather exposed against the harsh realities the country is currently facing.

We all want to “Build Back Better”, but there needs to be a solid foundation from which to build on. This speech simply felt like a hopeful distraction from a multifaceted crisis that only seems to be going in one direction.